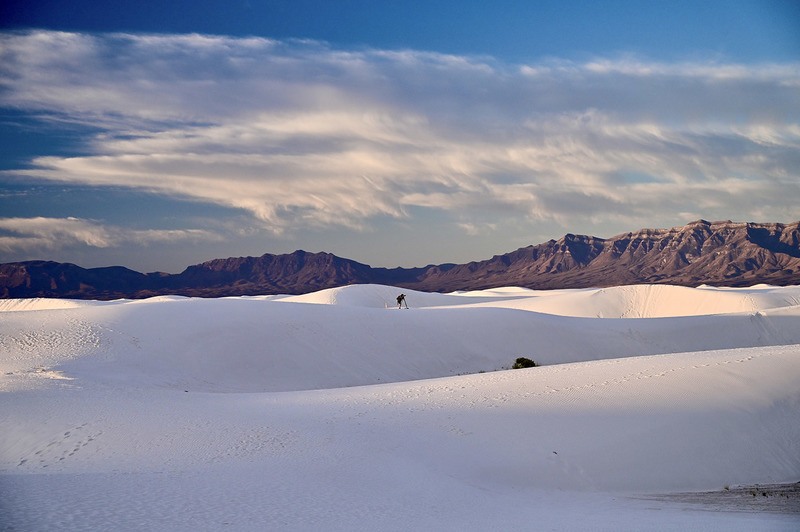 Posted at 08:19h in Destinations by Jim Tobalski 2 Comments

I liked White Sands National Park in southern New Mexico, but I wasn’t gaga over it. Now I need to explain that assessment.

First, it’s just one person’s opinion. Others would disagree. And remember, I’m a 67-year-old active adult who understands he’s not a teenager anymore.

I arrived mid afternoon in early November and drove into the park, stopping along the way for short walks and turnout views. I didn’t enjoy it. All the dunes were trampled with footprints and runways from sand sleds. Not the pristine and iconic views I remember from online photos and the park’s website.

After a pep talk with myself, I concluded that White Sands offered great fun for families, from sledding to biking and even horseback riding among the dunes. On the other hand, I wanted to commune with nature and photograph the famous gypsum white sands untouched by human feet and activity.

That evening, I decided to give White Sands National Park another try. The next day, I arrived at dawn, soothed by a cool, 40-degree morning, motivated to hike the park’s longest trail, the five-mile Alkali Flat Loop Trail. I figured that the farther I trekked away from the parking lots, the more likely I’d encounter my vision of serenity and unblemished, snow-white dunes.

And that’s what I experienced. I met only two other hikers during my route over the up-and-down landscape. The hiking was easier than expected because the dune surface here is more compact, creating less “trudging” associated with walking softer dunes, like in Great Sand Dunes and Death Valley national parks. The trail also provided great views of the white landscape, enhanced by the early day shadows cast among the dunes. For me, the park’s mesmerizing rolling sandhills vanish by midday with the sun overhead, eliminating the interesting contrast that most photographers seek.

The day before I arrived at White Sands, I checked the park’s website to make sure it would be open. Yes, the park frequently closes for hours or even most of the day, for missile testing. I can handle a few mosquitos while hiking, but I prefer to avoid large weaponized projectiles.

Visiting White Sands was part of my two-week desert trip in Arizona and New Mexico. I teamed up with WRT co-owner Martin Rose for the first week, touring and hiking in Petrified Forest National Park, Canyon de Chelly National Monument, Bisti/De-Na-Zin Wilderness Area and Bandelier National Monument. Then I finished the second week on my own by exploring Bosque del Apache National Wildlife Refuge, White Sands, Chiricahua National Monument and Saguaro National Park. I started and ended this journey at the Phoenix Airport. In the months ahead, look for more articles and photos from this desert adventure.