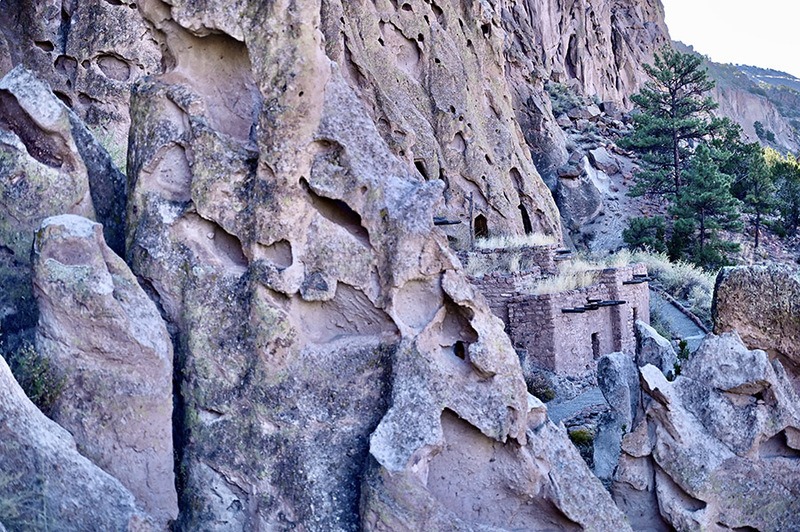 If you’re near Santa Fe or Albuquerque, New Mexico, check out Bandelier National Monument and its fascinating ruins of ancient cultures and its network of hiking trails. We visited in early November when the monument was less crowded and the temps provided a nice chill for hiking. But on the downside, we encountered fewer wildlife and no wildflowers. I’d like to return in the spring for more diversity.

We walked the Pueblo Loop Trail near the visitor center which takes people to the Big Kiva, Talus House and Long House cliff dwellings. These ruins are different than the larger “cities” in Mesa Verde National Park of Colorado. But we liked how close we could get to these dwellings that resided inside the rocks and caves of Bandelier. We peeked inside these ruins by climbing short wooden ladders, while feeling compelled to respect their homes even though the residents abandoned them more than 500 years ago.

We continued our walk to Alcove House and climbed the series of ladders to reach this site. If you don’t like heights and ladder rungs, I recommend you skip this destination. The other ruins are more interesting, but we liked the climbing adventure and views of the cliff walls along this section of trail.

Bandelier’s trails lead to back country

Bandelier National Monument offers hikers 70 miles of trails, both long and short treks. The three-mile roundtrip hike to Frijoles Canyon Upper Falls features great scenery and geological formations. The waterfalls will likely be flowing in spring but don’t expect much in late summer and fall.

The 1.5-mile loop trail, called Tsankawi, is located in a small section outside of the main monument and it features additional ruins, petroglyphs and caves, including a few ladders to climb. For the more adventurous visitor, 70 percent of Bandelier is designated wilderness and there’s plenty to explore throughout the monument.

We had planned on also hiking in Kasha-Katuwe Tent Rocks National Monument which is close to Bandelier. We were disappointed that it still remained closed as of 5/2022. The monument initially shut down because of the pandemic’s impact on local native American communities. Kasha-Katuwe is overseen by the Bureau of Land Management in close consultation with the Pueblo de Cochiti and other groups.