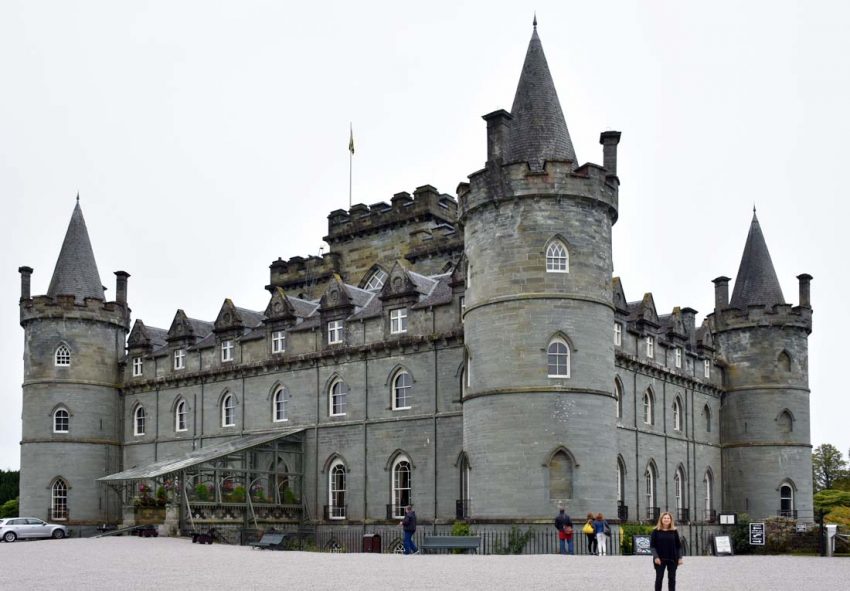 Updates for 2021 — Inveraray Castle and the nearby town of Inveraray, Scotland are favorites of B and Thorny, discovered during our British Isles cruise. Sitting magically along Loch Fyne, Inveraray Castle should be on your list of “best castles in Scotland.”

This adventure begins with our cruise ship docked at Greenock, outside of Glasgow. We did a Princess Cruise 14-day tour of the British Isles. Greenock was our first stop in Scotland after visits to Ireland and Northern Ireland. Most of our shipmates ventured to Glasgow, but we opted for a private tour into the Scottish Highlands. It was a magical day with the navigation and delightful commentary of our driver, Gordon, of Inverclyde Taxi.

Travel to Inveraray Castle was via the Scottish Highland region of Loch Lomond, the sparsely populated home to rugged mountains and deep lochs. Loch Lomond has a mystical feel of history, tartans, kilts and the clans who once ruled the land. Gordon entertained us with the region’s history and folklore, as we saw farms and tiny villages that dot Loch Lomond and date back hundreds of years. He had a great way of being entertaining and informative at the same time. Traveling with Gordon as our guide was a delight in itself. Loch Lomond is the largest freshwater lake in Britain. If the names sound familiar it is likely from the popular Scottish love song “Bonnie Bonnie Banks of Loch Lomond” (you take the high road and I’ll take the low road).

Tip for avoiding the crowds at Inveraray Castle

Gordon timed our Inveraray Castle arrival to avoid the big tour groups, so we explored freely with only a handful of visitors. What makes this castle so cool is knowing it has been continuously occupied since the 1300s by chiefs of the Campbell clan. The current Duke and Duchess of Argyll live in the home with their children. The Duke is often found working in the gift shop and autographing books. Family photos trace the history, including the Duke’s two elephant polo world championships, which was a completely new sport to me. To see any castle is special. To visit a castle that has been continuously occupied for hundreds of years and whose ground still produce revenue to support the castle is amazing.

We’re big fans of the PBS series Downton Abbey, so it was exciting to learn that Inveraray Castle served as the fictional “Duneagle Castle” in the show’s two-hour season finale. Home of Lord Grantham’s cousin, Shrimpie, Downton Abbey features Inveraray Castle interior and exterior locations, and features the surrounding region. Inveraray Castle was also featured in an episode of the PBS television series “Great Estates Scotland.” Soon as we got back to the States, we looked up both shows and enjoyed seeing the castle scenes again.

Inveraray Castle was shown at its best in the popular PBS series Downton Abbey, with magnificent shots of the castle, gardens and surroundings.

The West Highland’s spectacular hills, lochs and glens were used throughout the episode. The Scottish scenes opened with the Grantham party arriving at the castle, to be welcomed on the original front steps of the castle (gardens entrance), before going into the Armoury Hall.

Dinner was held in the State Dining Room, sparkling with Argyll family silver and gold nefs. Other scenes included the Grantham and Flintshire ladies strolling in the formal gardens, target practice for stalking in the garden, a family picnic over-looking the Dhu Loch, Anna and Bates picnicking by the river, stalking scenes high in the estate grounds and salmon fishing in the river.

This is actually the “new” castle, built in the 1700s adjacent to the former estate. A 1975 fire did major damage to the castle, but it has been meticulously restored. Visit and you’ll learn how the entire village showed up to save the castle and its contents when fire was discovered, and how there was a world outpouring of charity to fund its repair and reconstruction.

The day of our visit was dreary and overcast, not unusual for the British Isles. Our exterior photos certainly don’t do the place justice. You’ll have to imagine a blue sky with billowing clouds and sunshine bringing out the castle stonework’s fine details.

Allow two hours for touring the castle interior. Highlights include visits to the State Dining Room, Tapestry Drawing Room, Armoury Hall, Gallery, Clan Room, Victorian Room, MacArthur Room and Picture Turret. The interior tour concludes in the original basement kitchen, used until the 1950s. Copper pots still hang on the walls and sit atop stoves as if dinner will be prepared any moment.

The Armory Hall is one of the first rooms that castle visitors encounter, and it is an experience you will never forget. Iconic to the castle, the Armory Hall ceiling, at 21 meters, is said to be the highest room of any house in Scotland. The walls display 1,300 examples of 16th and 17th-century pole-arms, muskets, broadswords and axes. Much of the display comes from the Argyll Militia and was used at the Battle of Culloden. This is impressive for castle visitors and is an amazing historical display. I could have spent the entire visit exploring historic battle armaments covering the walls and on display in exhibit cases.

Castle visitors explore rooms that closely resemble what like what castle life was like when the current Inveraray Castle first opened. The State Dining Room features elaborate paintings, tapestry dining chairs, table and sideboards commissioned especially for the room in the late 1700s. The Tapestry Drawing Room is decorated in Parisian style and still retains the original set of Beauvais tapestries in the setting specifically designed for it.

Continue your Inveraray tour with 16 acres of garden

Your interior journey complete, visit the Tearoom if you need food or drink; take a potty break; check out the gift shop and then head outside to tour the extensive grounds and gardens. Due to time constraints, we barely touched the gardens, but what we saw was beautiful and we want to get back and spend more time; a lot more time. The gardens cover 16 acres, including two acres of formal lawns and beds. Beyond the gardens, walking trails take you deeper into the estate grounds, with a guide of key points along the way.

We had lunch in the nearby town of Inveraray, built simultaneously with the castle. The town seems frozen in time. Take away the cars and it’s easy to imagine you’re walking the streets of a magical village in the 1700s. There are good hotels and restaurants in Inveraray should you be traveling by car or tour group. That gives you time to explore the region’s heritage of whisky, prehistoric sites and yes, more castles.

After exploring Inveraray’s grand Main Street, walk along the adjacent waterfront of Loch Fyne to take in the beautiful views of Scottish Highlands rising up from the lake and fishing boats tied at the dock. We had lunch at the George Hotel, originally built as two private homes and combined into a hotel in 1860 by the Clark family, who seven generations later still reside in the hotel. Next time we visit I want to include time to check our Loch Fyne Whiskies. It looks like a cool place to sample the local whiskey fare, but time was short and we could not go inside.

Note: This article includes updates for 2021.

Learn about the flower houses of Luss and other nearby attractions

A day in Scotland – Loch Lomond, Inveraray Castle and Luss