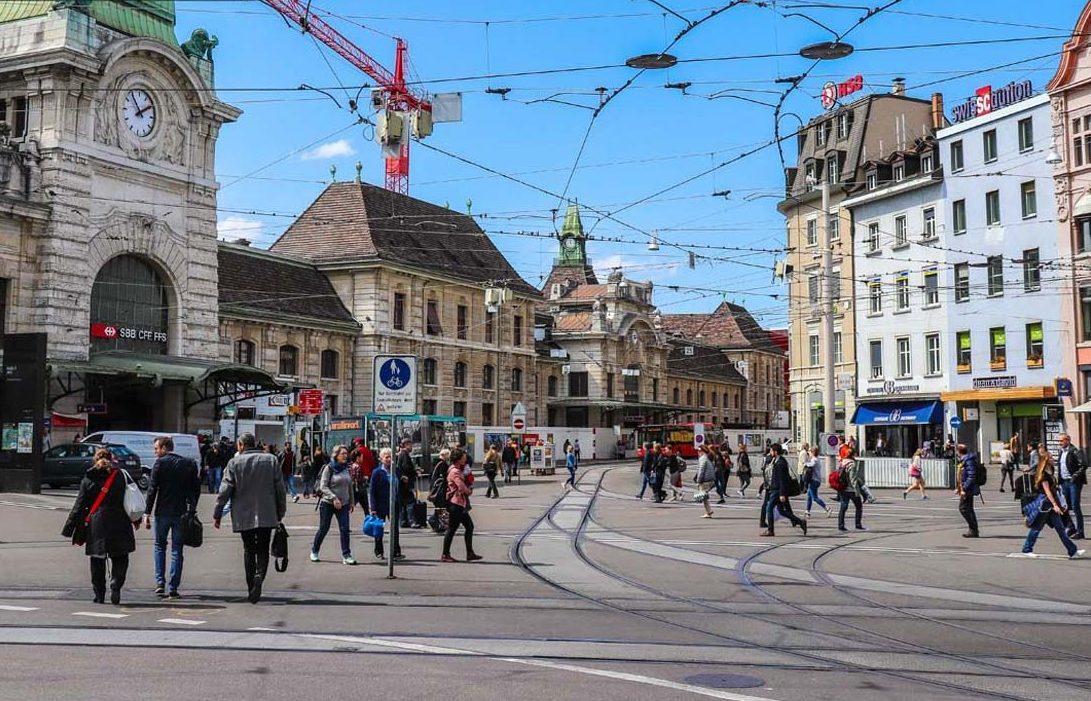 12 Nov Our funny driving misadventure in a foreign country

“Dad, there’s a train behind us”

Knock, knock, knock. The old man’s cane shattered the silence as he rapped on the window of our rental car window. Sheepishly I eased down the window and heard these stern words, “Sir, you can’t be here in that car.” “Yes,” I explained. “I am only here because I drove our car onto the tram track and had to escape trains coming towards us.”

“Here” was a large pedestrian-only plaza in Basel, Switzerland, crowded with hundreds of people enjoying their weekend outdoors.

This was day eight of a family trip to Germany for Oktoberfest and Switzerland for Alps hiking. We booked rooms in Munich, knowing they would sell out, but otherwise opted to follow our bliss and find hotels as we went.

Our unscripted travels were pure joy until this day, when we found Freiburg’s hotel rooms were all booked for a festival. So we journeyed merrily down the road to find a room. Cute hotels in small towns? Booked up. Dingy places outside larger cities? No dice. We went across the border into Switzerland to Basel — large city, gotta have vacancies? Not when the G8 is in town.

It was in Basel that our mishap began. I drove while my wife and son burned up their phones in broken self-taught German and frazzled English looking for a room. I rolled up to a stop sign and the GPS said, “Turn left.” Looking at the road signs, I scratched my head because something didn’t seem right. But, of course, I followed the command of my GPS pilot.

Quickly it was clear that we were no longer on a road, but train tracks. “Calm down,” I instructed my crew. “I’ll simply drive a bit until I can get off the tracks and back on a road.” This calm was short lived as our son noted, “Dad, there’s a train behind us!” While processing this dilemma, another tram appeared through the windshield.

Rather than get squished like a soda can, I eased the car off the tram tracks onto a crowded pedestrian-only plaza. We were safe, but obviously not where cars are allowed. The best exit plan I could concoct was abandon the vehicle and tell the rental car company it must have been stolen. About that time an elderly gentlemen approached, rapped on the glass with his cane, and explained we had to get the hell out of Dodge.

“Make your way slowly and carefully to that alley”

“Make your way SLOWLY and CAREFULLY to that alley,” he said, pointing his cane like a divining rod to an opening 100 yards and hundreds of people away. We eased our car through the crowd. It took a while. We got a number of “dumb tourist” glares. But we made it out. Done with GPS for a while, we guessed our way back to the freeway without use of navigation.

We were freed from our near tragic experience, but still had no place to sleep for the night. Mitch got back on his phone, desperate for anything that would get him out of the car because tension levels were code red. “Success,” he announced after finding a room at Courtyard by Marriott connected to a giant indoor water park on Basel’s outskirts.

He failed to mention the only available room was a junior presidential suite costing big big $$$$. I balked, causing Mitch to hit his breaking point. “Fine, whatever. No more driving,” he exclaimed, plunking down his credit card and telling the front desk staff to ignore my protests and book the room.

Before you scold me, yes, I know that I put my passengers and other innocents in danger by my foolish actions. And I promise you this was anything but funny at the time. But travel can be so stressful because of the things that go wrong, and that is not the enduring memory you wish to keep of the trip. So we choose to view our mishaps with humor when we can.

Other funny moments from that trip include:

Waking up to find yourself lying on a bench at Oktoberfest after consuming a couple liters of beer. Travel tip: If you plan to spend an entire day enjoying the beer and festive atmosphere of Oktoberfest, include lots of food.

Learning that our son spent a fear-filled day at a nude spa in Baden-Baden. His fear was not being naked in a spa filled with strangers. His fear was that at any moment his mom or dad might come walking in sans clothes. We chickened out on our naked spa day, but I guess we forgot to tell Mitch. Poor guy. He shelled out big bucks for the experience but was stressed the entire time. Travel tip: If you plan to visit a nude spa while traveling with adult children, alternate days so that everyone can relax without fear of seeing mom and dad naked.