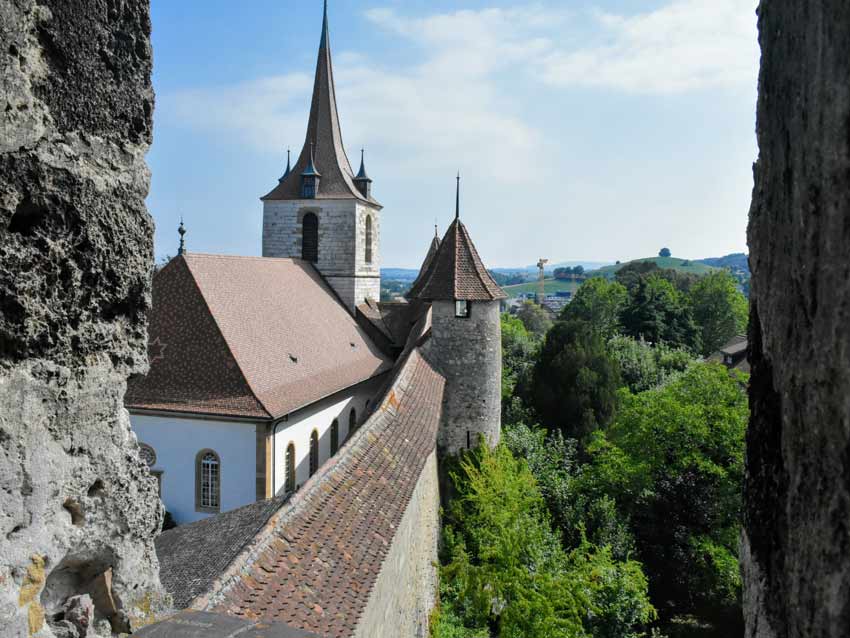 Quaint, preserved walled city takes you back hundreds of years

Trip planning is vital. We spend countless hours researching places to visit, eat and stay. But we also allow time for travel serendipity as we learn about new places from locals and fellow travelers. Some of our favorite memories are things we learn talking to an innkeeper or the woman we sit next to on a train!

Such is the discovery of Murten (or Morat for French speakers) in Switzerland. (Pronounce it Moor-ten or the Swiss will have no idea what you are saying.) This uber-charming town of 8,000 is a welcome change from the bigger Swiss cities. The town of Murten and surrounding lake region is a day-trip from Bern, a mere 45 minutes by train.

Still near-virgins at train travel, this outing includes our first train split. After stopping en route from Bern, an announcement proclaimed that the first two cars would proceed to “I don’t remember where” while the back two cars would journey to Murten. Scurrying back to the correct car, we were thankful that the announcement included English! Often train announcements are only in German, so know the German term for your destination (and the stop before). On arrival, it’s a quick 5-minute walk from the train station to Murten’s walled historic district.

Given its locale close to the border with France, you’re just as likely to hear French spoken here as German. History says that were it not for a victory by the Swiss Confederates in the 1476 Battle of Murten, the town would be part of France today. The city was officially founded in the 12th century, but its museum traces the region’s history dating back 6,000 years. That span of history is always awe-inspiring to my American mind, which thinks 300 years is ancient.

Take away the cars and paved streets and you could easily believe you stepped back in time hundreds of years. Fired destroyed much of the city in 1416, after which all buildings were constructed in stone, allowing them to be preserved for us to marvel at today.

Things to do in Murten:

Originally constructed in the 12th century, the town wall provided protection against attackers. Nowadays the preserved medieval wall, the only one in Switzerland that visitors can walk all the way around, provides magnificent views of Lake Murten and Old Town’s roofs and decorative chimneys. You can’t help but feel the history as you explore the ramparts and towers. The wall was crucial in the 1476 Battle of Murten, when the town held out for 13 days against attack from the Duke of Burgundy until Swiss Confederate forces could arrive and defeat the invaders. This was Thorny’s highlight of the day.

Murten’s buildings inside the rampart walls are preserved to perfection. Every building has a story. Stop by the tourist office near the Bern Gate on arrival for a walking guide with extensive descriptions of key sites, information on tours and excursions and ideas on things to do outside of Murten on the lake or surrounding countryside. Laid out along three main streets. the city is easy to navigate. Every building has its own history, like the Schwarzen Alder (Black Eagle) hotel, constructed by merging two 16th century houses. Most of the shops, hotels and restaurants are along Hauptgasse (Main Street) but don’t miss the side streets.

We discovered eight water fountains dotting the city, most dating back to the 15th and 16th centuries. These provided water for drinking, cooking and bathing until 1890 when houses were connected to a water line. The fountains remain and are beautiful. Feel free to take a drink. Reluctant at first, we finally took the plunge (so to speak). Most famous of the fountains is Torliplatz. Located at the city entrance bearing its name, spring water from several sources flows into this fountain and then on to others in the town.

Then visit its three churches

Murten’s three churches seem modest compared to many built in medieval Europe, and we found this refreshing. Check out the French and German churches inside city walls and the Catholic Church, which sits just outside beside the Torliplatz fountain. Oldest of these is the French Church, dating from 1481.

Marvel at the Bern Gate

The Bern Gate was first mentioned in history in 1239. It’s been destroyed in battle and rebuilt several times since. The current gate was constructed in the early 1700s. It’s clock still works today, powered by three heavy stones raised by hand cranking daily.

Murten Castle sits at the town entrance closest to the train station, and thus is the first impression of the city for most visitors. The castle dates to the 1200s, though it has largely been rebuilt over the years. It was constructed and first occupied by a Count, later serving as a hospital, prison, barracks and today houses government offices for the district.

Located in a former mill between the walled city and Lake Murten, the Murten Museum showcases 6,000 years of regional history from ancient lake dwellers to the Battle of Murten. The building’s waterwheel, once used to power the mill, still operates.

To see Murten from water, take a boat cruise. The Tourist Office can help you with options and times. Our tour did a loop around Lake Murten. Other boats take you to Lake Biel and Neuchatel, connected to Murten by canals. The boat makes several stops. If we visit again we’ll get off to tour the Vully vineyards and sample the region’s wine. We failed to do our homework prior to visiting and gazed in wonder as the boat passed by.

Our legs were weary from several days hiking in the Swiss Alps, otherwise we would have included a bicycle trek around the three lake region. We saw both day trippers and multi-day bikers with gear bags. With nearly 106 miles of bike trail, there’s something for every level of cyclist. Most popular is a two-hour pedal around Lake Murten or a ride from Murten to the 2,000-year-old Roman city Avenches and back.