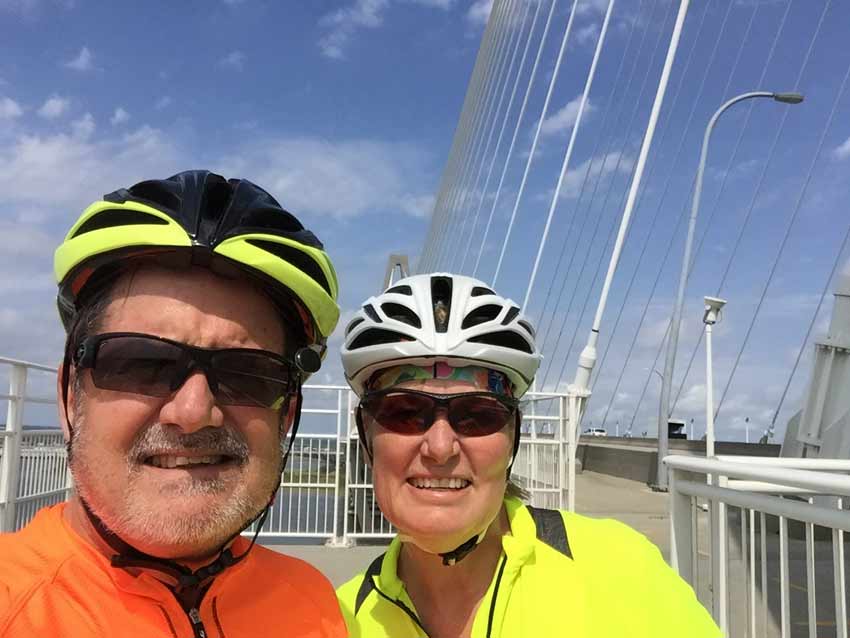 Consistently ranked among the best U.S. places to visit, Charleston, South Carolina is renowned for its history and food. We’d like to share another reason to love Charleston with our active baby boomer readers or active travelers of any age.

Charleston is home to one of our favorite bicycle rides … roughly following the Battery to Beach (aka Battery2Beach) route from Isle of Palms to Sullivan’s Island, over the Ravenel Bridge and through the streets of historic Charleston.

Your round trip total will be around 40 miles, depending on side trip options. Hard core cyclists could pound this out in less than 3 hours, but we recommend thinking of this bicycle ride as a day trip, getting off the bike at every opportunity to soak in the great things about Charleston, Mount Pleasant, Sullivan’s Island and Isle of Palms. My mother hails from Charleston, so I’ve been here more times than I can count. But you see things from the seat of a bicycle that you miss from a car.

Our ride begins in Wild Dunes, located at the far end of Isle of Palms. Isle of Palms, Sullivan’s Island and Mount Pleasant all run together on the east side of Charleston’s historic district, separated by the Cooper River. We’ve stayed in various condos, homes and hotels in the region, liking this area because we’re just minutes from historic Charleston, but also near the island beaches, fantastic seafood at Shem Creek and outlying historic and nature destinations.

If you stay in historic downtown Charleston instead, just reverse our route. Many visit the historic section without ever venturing further, but they are missing out. Charleston bike shops can fit you with a rental bicycle, helmet and provide route advice. Or bring your own helmet and use the city’s bike share program, Holy Spokes. Bike share rentals are offered by the hour, day, month and year, with pickup locations throughout the historic district.

Our bike route from Isle of Palms to historic downtown Charleston. {Refer to text for side trips not shown on map.)

The Wild Dunes resort community on Isle of Palms is a stark contrast to historic Charleston’s crowded roads and historic buildings. Wild Dunes is spread among miles of beautiful beach with tennis courts and two golf courses. Visitors have their choice of hotel, condo or private home accommodations. We began our bicycling day with a quick loop around the island community and its manicured grounds, lakes and marshes. Leaving Wild Dunes, you’ll continue to explore Isle of Palms on Hwy. 703/Palm Blvd. which runs along the Atlantic Ocean or Waterway Blvd. on the Intracoastal Waterway side of the island. We did one road coming and the other upon our return. Traffic is light along this stretch of road and development is mostly private homes.

Rounding the bend at 21st Ave., pass First United Methodist Church and enter the Isle of Palms business district. Residents and visitors find gas, groceries and most of the island’s restaurants here. We recommend visiting Acme Lowcountry Kitchen if you’re staying in the area. Acme serves breakfast, lunch and dinner and they take reservations – a great perk if you’re visiting during a busy season or on the weekend. The Acme menu theme is low country – including a whopping NINE variations of shrimp and grits. I argued that we should end our cycle trip here and eat our way through the menu, but B insisted that we pedal on, saving Acme as our end-of-tour reward.

Hwy. 703 is bike-friendly along this stretch, offering good views of the marsh and Intracoastal Waterway, but since this ride is suggested as a journey and not a sprint, consider Carolina or Ocean Blvd. as alternate roads to the bridge separating Isle of Palms from Sullivan’s Island. Sullivan’s is an affluent suburb to Charleston, and a favorite beach destination for vacationers.

We recommend pausing your bicycle adventure to seek out two historic landmarks on the island. You’ll first encounter Sullivan’s Island Lighthouse (or Charleston Light). Activated in 1962, its unique claim is being the last major lighthouse built in the United States. It looks more like an airport control tower than a traditional lighthouse design. The triangular shape is supposed to make Sullivan’s Island Lighthouse more wind resistant (don’t the old round, stately ones weather storms just fine?). Some island residents consider the design an eyesore, but it’s unique among lighthouses and worth a ride by. Now a historic site operated by the National Park Service, you can walk up to, but not enter, the lighthouse.

Visit Fort Moultrie, defender of our coast for 171 years

Pedaling a few blocks further you will find Fort Moultrie, historically significant for its defense of the American seacoast for 171 years. Initially constructed in 1776 to defend Charleston, the site continued to protect our coastline until closing after World War II in 1947.

The original fort was still under construction when attacked by British ships early in the American Revolutionary War. Fort Moultrie’s soft Palmetto log walls absorbed or reflected the cannonballs from enemy ships, rather than being smashed to bits. The fort survived the attack, with enemy ships forced to retreat, saving Charleston from British occupation. The Palmetto logs and significance of that victory inspired the South Carolina state flag and “Palmetto State” nickname. Visitors get to experience the fort at major periods in history, beginning with the World War II Harbor Entrance Control Post and moving back in time to the 1776 Palmetto log fort site.

Upon leaving Fort Moultrie, back track to Hwy. 703 and enjoy a beautiful pedal across the marsh and Intracoastal Waterway to reach Mount Pleasant. The serene beach vibe quickly gives way to a heavily trafficked, busy Charleston suburb city. Our route keeps you off busy roads when possible, and the side roads are beautiful. At times there is no alternate route but to bicycle busy Coleman Blvd. Sections of Coleman have dedicated bike lanes, and for the sections that do not, bicycles are common and residents are good at keeping an eye out for bikes. While not the most pleasant part of our journey, it’s the only way to reach Ravenel Bridge and historic Charleston, both spectacular destinations.

Soon after crossing the bridge into Mount Pleasant, you’ll see Center St. on your left. Miss it and you’ll next come to McCants Dr. A left turn on either gets you off the busy highway and into a lovely residential section of houses, churches and parks. Both roads end on Pitt St. where you turn right and bike along Hog Island Channel and maybe catch a glimpse of Crab Bank Seabird Sanctuary between the houses.

You’ll pop back out on Hwy. 703 at Shem Creek, an area the locals favor for fresh seafood. Fishing boats line the docks and seafood markets abound if you prefer to pick up fresh seafood later to cook at home. We counted nine restaurants along Shem Creek where it crosses Coleman Blvd. All have good Trip Advisor ratings. We met friends at Water’s Edge for lunch another day during our visit and enjoyed the food, service and view. Plan dining or drinks around sunset and you will be treated to fresh, local seafood and a beautiful sunset.

Shem Creek Boardwalk takes you by bicycle or foot through the marsh to the mouth of Shem Creek. Here you are rewarded with views of the marsh and Charleston Harbor from Fort Sumter to Castle Pinckney. Water taxis from historic Charleston drop guests here at the public dock for drinks and dinner. The boardwalk connects to the commercial docks for an up close look at working shrimp and crab boats. Yum.

Return to Hwy. 703/Coleman Blvd. and continue your trip. The next point of interest is Patriots Point, home to a Naval Museum featuring three World War II era ships including the USS Yorktown aircraft carrier. Boats leave the Patriots Point dock for Fort Sumter tours. There’s not ample time to tour the ships on this bike ride, but they are impressive to see as you pedal by. Return later and plan to spend several hours touring the ships and museum exhibits.

Towering above Patriots Point is another Charleston landmark, The Arthur Ravenel Jr. Bridge (aka Cooper River Bridge). A bicycle ride, run or walk over Ravenel Bridge should be on every Charleston visitor’s itinerary. It’s a thing of beauty to behold, and a great way to see the city’s historic waterfront and Mount Pleasant, separated by the Cooper River. Charleston is vulnerable to hurricanes and earthquakes so the bridge is designed to endure winds greater than 300 mph and earthquakes of 7.4 on the Richter scale.

The trip across is approximately 2.5 miles. Your heart will be racing by the time you reach the bridge’s highest point, nearly 200 feet above the river. Bikers, walkers and joggers are separated from the eight lanes of car traffic by concrete barriers. You enjoy your own dedicated 12-foot wide path across the entire bridge. Allow time at the top for a few selfies and photos of downtown Charleston from the highest vantage point in the city.

As you leave the bridge continue onto E. Bay St. a short distance until you can get over to the lightly traveled Washington or Concord streets. You’ll pass the passenger cruise terminal, South Carolina Aquarium (which we have written about and highly recommend), Gadsdenboro Park and Waterfront Park. Return to E. Bay St. until it ends at Murray Blvd. and turn right (go left and you’ll be swimming).

Now you’re pedaling along the Battery section of historic Charleston where the Ashley and Cooper rivers meet to form Charleston Harbor. Family lore says my grandfather helped build the iron railing along the Battery wall, a fact that always humbles me. The area is historically important in the defense of the city. Views of the harbor are marvelous and this is a great place for mansion-gawking … home to some of Charleston’s finest historic antebellum homes.

Where Murray Blvd. ends, the Battery2Beach route continues across the Ashley River and on to Folly Beach, but we left the route and this point and explored the streets of historic downtown Charleston.

If you have a choice, Sunday mornings are best to bike the historic district, when traffic is light and church bells are ringing all over the city. We came on a weekday, and found traffic light if we avoided the major thoroughfares. You can cover most of the peninsula in an hour if you don’t stop, but we encourage you to stop often and explore cobblestone alleys, beautiful gardens and antebellum architecture. We discovered 150-year-old Colonial Lake Park on a recent bicycle adventure. The lake covers an entire city block in downtown Charleston, lined with benches and more than 20,000 plants. The locals love it as a place to walk and jog. Tourists rarely lay eyes on this beauty.

When it’s time to head home, simply navigate back to E. Bay St. to access the Ravenel Bridge and reverse the route described above.

Battery2Beach is an initiative of Charleston Moves. They have a route map and history at the website Battery2Beach.com.

Planning a Charleston visit? We’ve got recommendations to experience the low country outdoors.