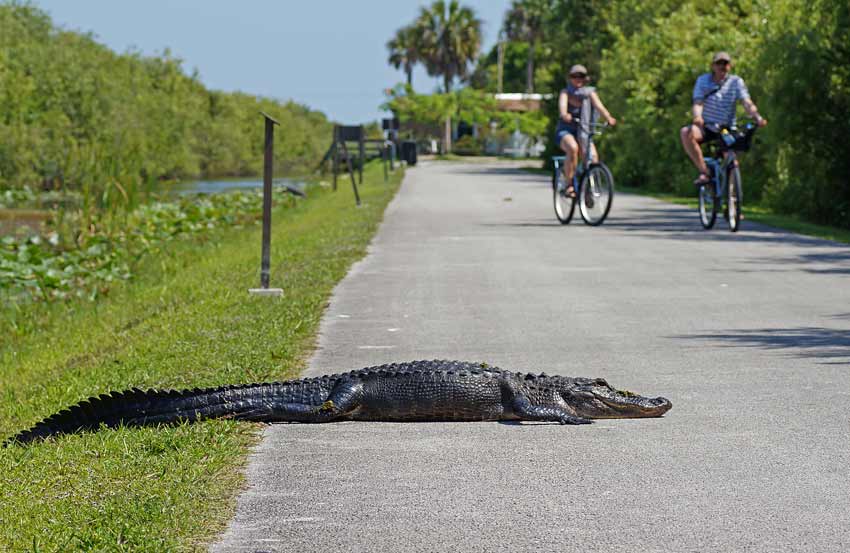 You’d be disappointed if you visited Shark Valley to see sharks. The area gets its name because the swamp waters eventually drain into the Shark River Slough.

This northern section of The Glades (what cool, hip people call Everglades National Park) attracts bicyclists of all skill levels. The paved 15-mile trail follows an interesting swamp trench loaded with alligators, birds and insect life. We visited in early December and appreciated the mild, less humid temperatures, without the bugs. My wife and I toured the route in two and a half hours, taking our time to stop and photograph the wildlife and scenery.

We rented bikes from the visitors center concessionaire but most people toured the route with their own bicycles. If you rent, be aware that the bikes don’t have handbrakes, so it took us awhile to get used to backpedaling to engage the brakes. Guided tram tours are also available in Shark Valley. And we were surprised that bikes and vehicles co-existed nicely along the trail – only one tram passed us during the ride.

Some visitors walked the route but that option seemed tedious with bike and tram traffic. Two short hiking trails spur off the bike route: the Bobcat Boardwalk and Otter Cave Hammock Trail, both meandering through sawgrass and tropical hardwood forest.

Even with all of the human activity along the trail, we still encountered a wide variety of wildlife that didn’t seem too concerned with our presence. We’ve seen alligators during past visits to the Carolina coast and Florida, but this was the first time we’ve seen hatchlings up close, sometimes ten or so in a group frolicking near a huge adult gator. We also saw great egrets, white ibis, green herons, anhingas, great blue herons and my first ever limpkin. In addition, string lilies bloomed along the bike path.

Scenic drives near the Everglades

While on the Shark Valley side of the park, we decided to also travel two different scenic drives: the Loop Road in Big Cypress National Preserve and Janes Scenic Drive in the Fakahatchee Strand Preserve. I highly recommend the Loop Trail and stopping for the short Tree Snail Hammock Trail where we photographed the extremely rare liguus tree snails. The road was in good condition but we still drove slowly to enjoy the wildlife. Based upon our trip along Janes Scenic Drive, I can’t recommend it. The views weren’t as scenic and we saw very little wildlife, but sometimes nature doesn’t cooperate with vacation schedules.

We’ve visited the Everglades two years in a row and we may make it a three-peat in 2020. It’s America’s third largest national park in the lower 48 states, behind Death Valley and Yellowstone. During our previous trip, we spent more time along State Road 9336, which connects two visitor centers: Ernest F. Coe and Flamingo. I highly recommend this 30-mile, one-way drive and all of its short boardwalks and roadside scenery. I wrote about this section of the Glades in a previous Wandering Rose Travels article.

We chose Naples as our base camp

We toured the Audubon Corkscrew Swamp Preserve near Naples, which we used as our base for three days while exploring the northern section of the Glades. Corkscrew features a very well done boardwalk through the swamp and lettuce ponds.

Two Naples restaurants impressed us: Marie D’Anna Café and La Trattoria. We selected Marie D’Anna Café because of its Polish heritage and cuisine. Everything was spectacular, even the basics such bread and free potato salad appetizer, which were anything but basic. I ordered the Polish platter with cabbage roll and tomato sauce, peirogi and hunter’s stew – a ten on a scale of 1-10 – and washed it all down with Polish Okocim beer. The staff waited on us like we were family. La Trattoria serves up Italian-style and our food was excellent. We arrived about 4:30 p.m. and our waitress surprised us with, “All main menu items are 50 percent off.” Great food AND a bargain? Dining utopia.

We’re “Out West” people, usually traveling that direction to hike in the Cascades, Rocky and Sierra Nevada mountains. We’ve just started exploring the southeast, focusing on the cooler months of December and January. This year, we are planning a trip to Key West and sites such as Dry Tortugas and Biscayne national parks. We will also include several national wildlife refuges along the way.

Florida may be flat, but we’re discovering that we enjoy a vacation that combines the state’s unique ecosystems with its flamboyant urban playgrounds.