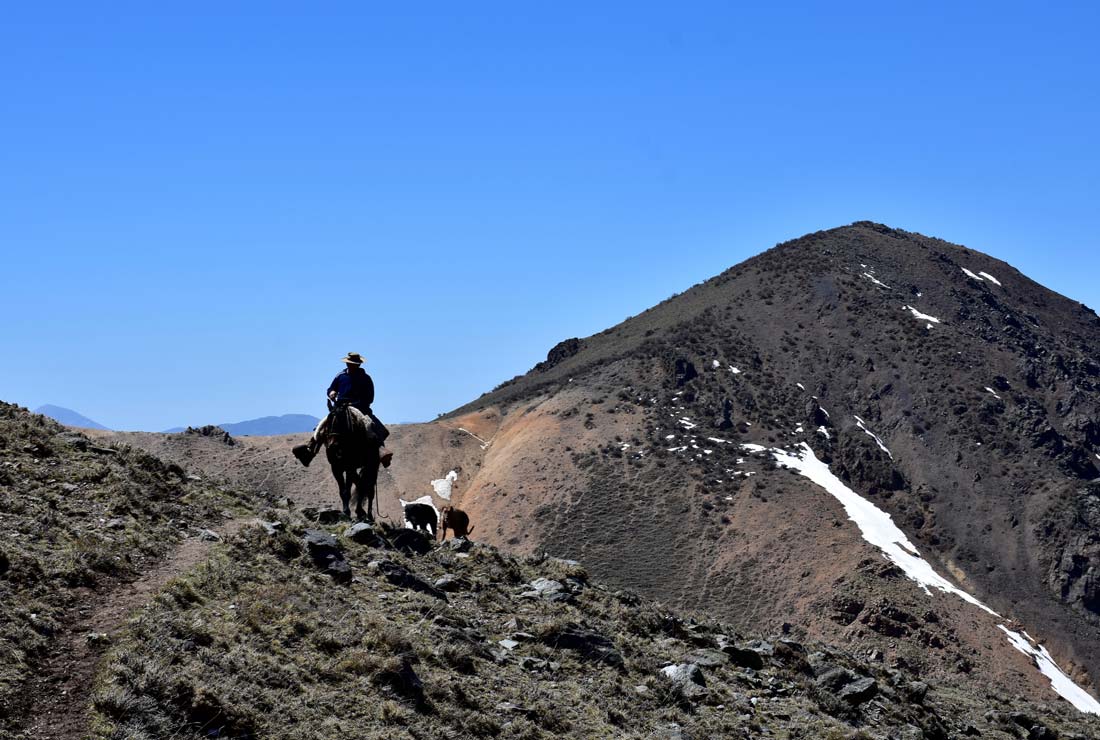 05 Sep Back in the saddle, high in the Andes

Posted at 14:00h in Latin America by Elizabeth Engle 0 Comments

This article is written by Elizabeth, B and Thorny’s daughter, and the next generation of Wandering Roses. A globe-trotting mother and ad agency marketing pro, managing social media and more for Wandering Rose Travels is her side hustle.

Spending your tenth anniversary in Argentina is a no-brainer. When said anniversary falls in Mendoza, the hard part is choosing where to celebrate – estancia or vineyard?

My safe self longed to be swimming in Malbec through a five-course meal, ogling grapevines under snowy peaks, and catching a well-deserved nap on the ride home.

After some soul searching, I opted to get back on the horse. Nothing commemorates a decade of love like facing fear, livestock, and a sore crotch for all the wrong reasons. 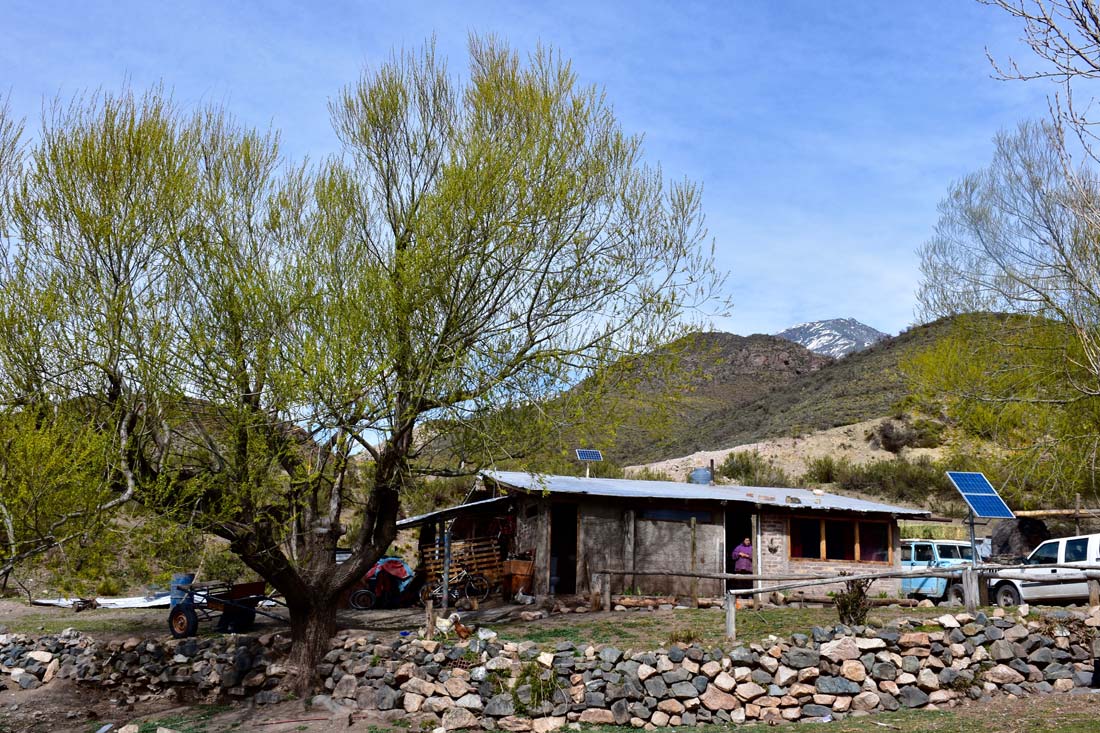 My husband, Joe, is very comfortable with animals. Growing up near his grandparents’ western Pennsylvania farm included activities like baling hay, hunting turkey, and removing bee hives. All this shaped Joe into a fearless determined, outdoorsy explorer. As did getting repeatedly bucked off a horse and being told to keep at it until he could ride.

This was in stark contrast to my suburban upbringing, where most of my family screamed and ran from black snakes. It also differs from my deep-seeded anxiety and utter lack of confidence controlling animals.

Horses can smell my fear and are less than thrilled with my Thigh Master death grip on their midsections. I’m stiff as board and awkward as hell. Guides groan while I poke along at a snail’s pace. My knuckles are white 90 percent of the time, and everything below the belt hurts for three days. I once insisted on being carted halfway back to town in a supply wagon instead of riding with our guide’s teenage son who insisted on going (what I deemed too) fast. 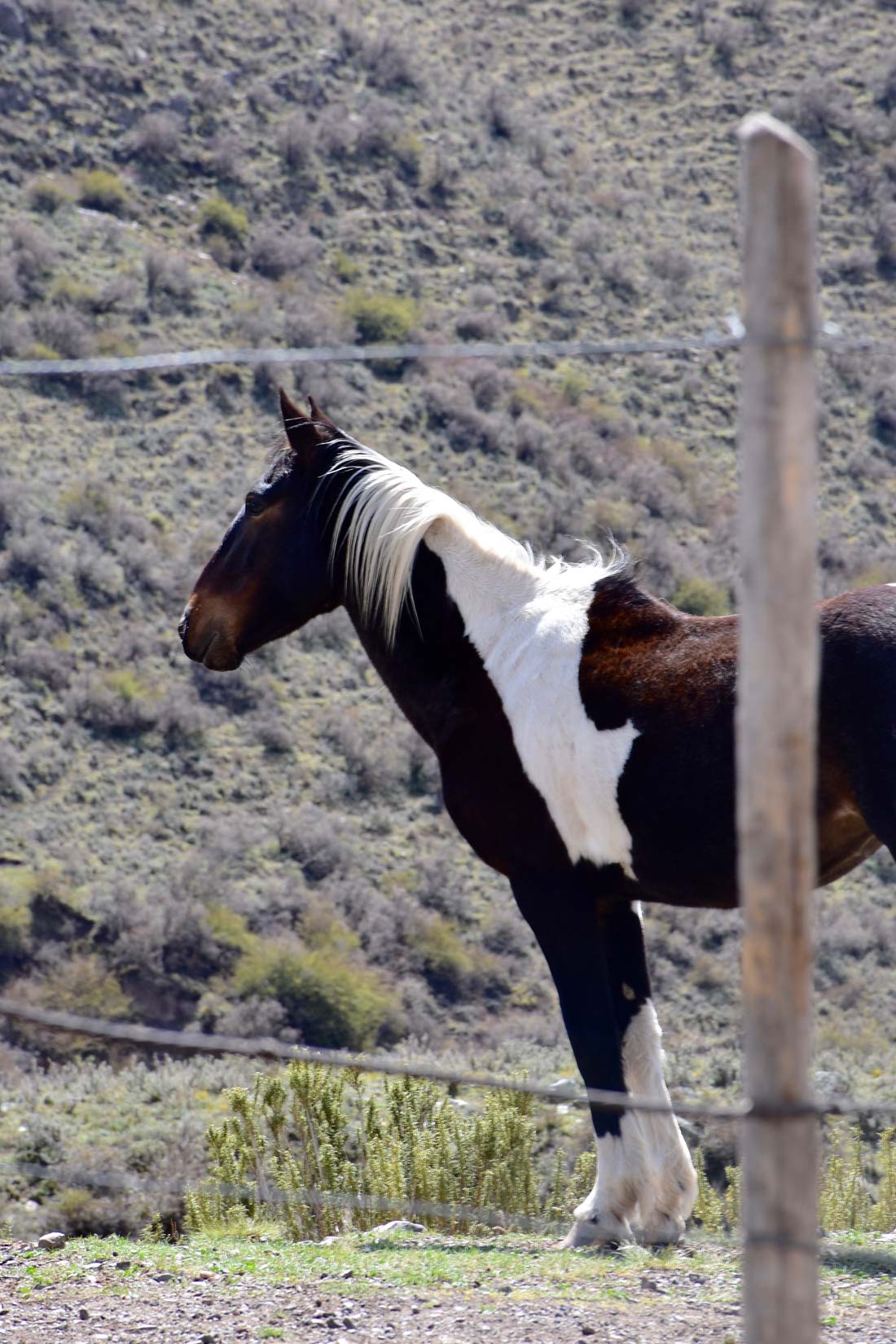 But we weren’t getting any younger and this was a rare opportunity for adventure with our two young children at home. The Real Gaucho Day here we come!

Our guide, Tim, was French, married to an Argentinian. A former Paris fireman with friends at the Bataclan terrorist attack, he relished local life and shared much about the Mendoza area and Daniel’s ranch where we would taste the cowboy life.

Daniel’s wife, Marisa, rolled dough with a wine bottle, fried sopapillas, and doused them with sugar. While Daniel’s son headed into the hills to round up the horses, we sipped bitter mate and explored their family farm, drinking in this distilled life.

Snapping hundreds of photos to manage the anticipation, an eternity passed before the horses’ tell-tale bells rang out. They filed into the corral for watering before it was time to drag them back up to the highest pasture.

Daniel was a quiet man and kind soul. He paired Joe with Flecha, named Arrow for his speed. I requested one called Roca, Rock, infamous for moving ridiculously slow. “I can do this,” I mumbled between deep breaths. “Good horsey. Easy. Slow and steady.” 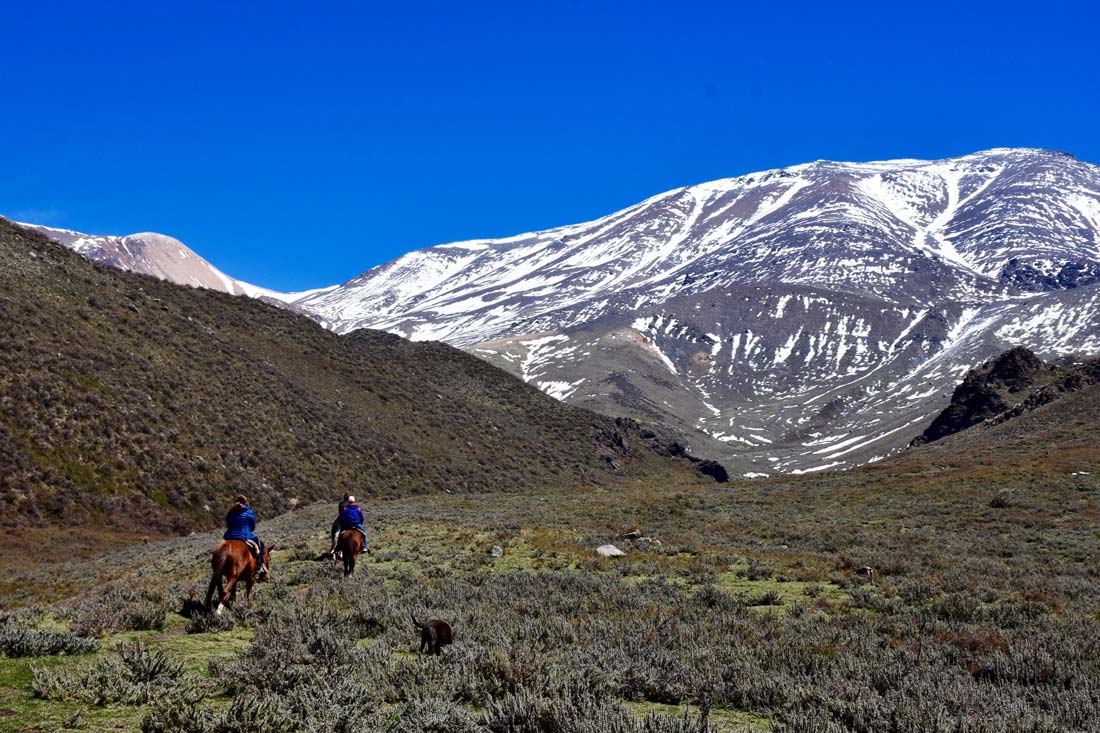 A ride to remember

Tim led the way, with a small pack of delighted dogs. Determined to enjoy the experience, I summoned every ounce of inner adventurer to relax mind and body, move with the horse, and savor all the sensations of riding the high Andes.

The first rocky descent, stream crossing, and short but steep climb had me quaking in my boots. But the views soon took over and I became as comfortable as I’ll ever be on top of a horse. We climbed to 9,500 feet under the impossibly blue high-altitude sky, toward peaks of year-round snow. Everything was vibrant and clear, the world’s chaotic news faded by the spring sun.

At the top of my game, and the ridge, we stopped for lunch. Miles away from a tasting menu with reserve wine pairings, it was one of the most fulfilling meals of my life. Simple and superb, like everything else that day. Daniel started a fire for the homemade chorizo, and we chunked cheese and bread with a pocket knife. Drinking nameless vino tinto from tin cups, marveling at the mountains – this was the top of the world. 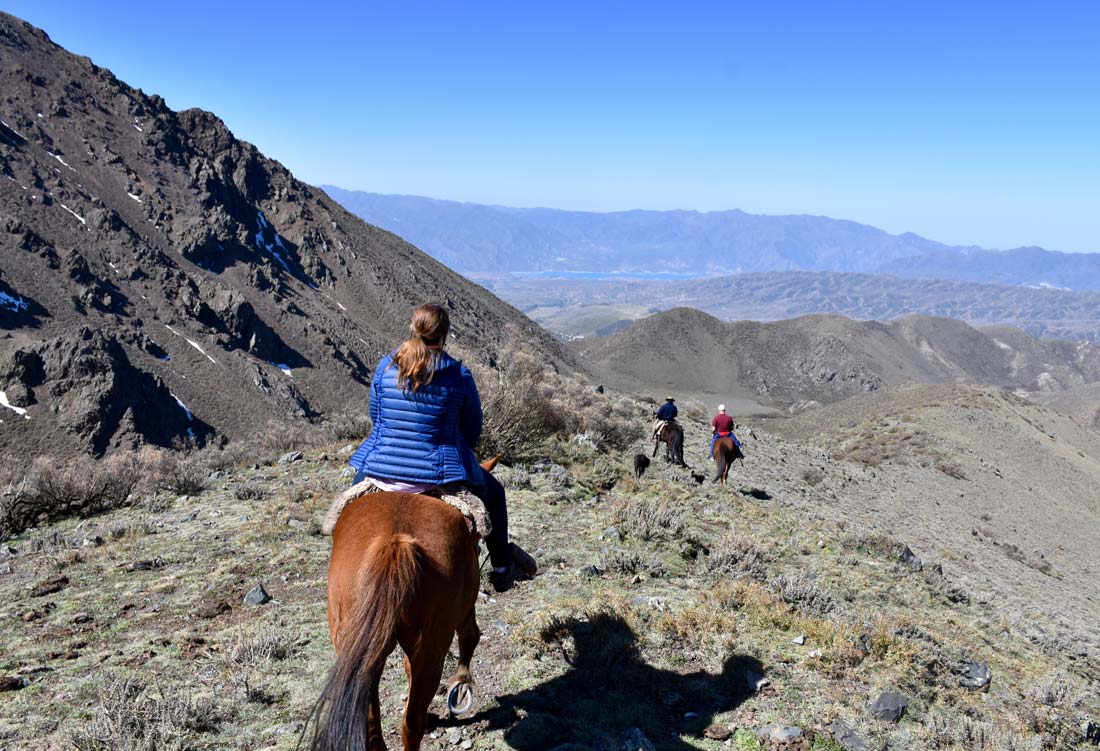 The steep path to redemption

Edges blunted by newfound cowboy confidence and wine, I couldn’t wait to mount my trusty steed. Then it was time to go down. Straight down.

The narrow trail along the ridge’s edge unleashed a flood of my usual cursing. Who’s a horse whisperer now? The valleys hundreds of feet below loomed like death traps. Gasping with every loose rock stumble, I stroked the horse to calm myself.

As we ambled on I wrangled my anxiety, forcing myself to loosen up and trust the horse to navigate the task at hand. Finally down the mountainside in one piece, I was the hero of my own spaghetti western.

Trotting bursts caught me up to Daniel, wordlessly watching condors as he does daily, but still with a sense of wonder. We followed the river gorge through one last scrubby pasture, growing closer to the farmhouse and farther from this fleeting, fantastic gaucho fantasy.