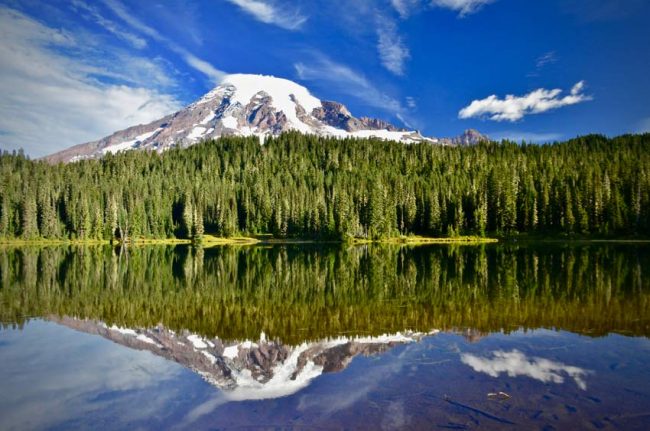 Plan to arrive during the alpine wildflower bloom

We stood on a trail completely surrounded by wildflowers, more than we’ve ever seen before. And while our timing inside this floral kaleidoscope at Mt. Rainier was carefully planned and researched, we still benefited from a little bit of luck.

That late summer day still remains as one of our best visits to any of our country’s outdoor destinations. Mt. Rainier National Park rises out of the Cascade Mountain Range 14,411 feet and dominates the weather and scenery in the Pacific Northwest, just a short drive from Seattle, WA.

Conservationist John Muir described the summer bloom of wildflowers at the park’s Paradise location, “the most luxuriant and most extravagantly beautiful of all the alpine gardens I’ve ever beheld in all my mountaintop wanderings.”

Let’s start with the mountain. It’s considered an active volcano capped with a cubic mile of ice, last erupting 2,000 years ago. But Mt. Rainier is carefully monitored and safe to visit. And it’s also a popular destination for serious climbers.

The park contains a great trail system taking trekkers to meadows, waterfalls, mountain streams, wildlife, 25 major glaciers and iconic alpine settings such as the morning view of Rainier from Reflection Lake (pictured above). We love the four-mile, round-trip hike up to Comet Falls, which you can extend to a seven-mile round-tripper to Van Trump Park.

Hundreds of wildflower species grow in Mt. Rainier National Park. I’ll share our own experience but first here’s what the park service says. “In most years, many flowers will be blooming by mid-July, and by the first of August the meadows should be very impressive.” All predictions are heavily dependent upon the winter’s snowpack and weather patterns. The Mt. Rainier National Park website posts updates during the summer on what’s blooming, but you’d have to be a very spontaneous traveller for those updates to be helpful, unless you live nearby.

We’ve planned three specific trips to the Paradise meadows at Mt. Rainier and its looping Skyline Trail. First trip – a bloomanation! Flowers everywhere. Their beauty made my knees buckle. Second trip – a lingering snow cover and a bust for wildflowers. And the third trip – some great blooms but not peak. Each time we arrived in late July or early August. We just returned from an early September trip, not expecting to see many wildflowers, but a few varieties were still blooming, like the gorgeous Mountain Bog Gentian. An autumn trip may not sound appealing, but the crowds are smaller and the wildlife are more active as they gorge themselves before hibernation and the mountain’s harsh winters. On one hike, we saw six bears, a herd of mountain goats, pikas and at least 25 marmots, one of our favorite critters to watch and admire.

The trail signs around Paradise command visitors to stay on designated trails because the subalpine meadows are fragile. It’s impossible to miss these signs. So why was there a family eating lunch and sitting in the middle of a meadow, flattening and likely killing all the wildflowers underneath? I’ll refrain from characterizing them. But I did confront the loathsome violators. Later on, I emailed park management requesting a volunteer ranger badge along with a citation book so I could fine hooligans who break the rules and disrespect nature. I’m still waiting for a reply to my request – maybe it’s in my spam folder.

Plan your accommodations based upon priorities

Visitors can choose from several park lodges. The historic Paradise Inn sits high up in the park with an incredible network of hiking trails right outside the lobby doors. So, it’s very convenient. But we chose accommodations just outside the park’s west entrance with access to more dining options. And we drove up to Paradise early each morning, about a 45-minute commute.

By staying just outside the national park, we enjoyed exceptional meals, which are scarcer inside the park’s boundaries. In past WRT articles, I’ve written about the amazing pie and food at the Copper Creek Inn. And “amazing” isn’t hyperbole.

Besides Mt. Rainier National Park, two other major national parks surround the Seattle area: North Cascades and Olympic. In terms of popularity, Olympic draws 3.1 million annual visitors, Rainier 1.5 million and North Cascades 31,000 (although the adjacent Ross Lake and Chelan Lake national recreation areas add another 300,000 visitors). As you can tell, North Cascades is less popular, mainly because it’s more remote. And while Olympic is truly amazing, Rainier would probably draw the same number of visitors but its Paradise region gets buried in 53 feet of average annual snowfall.

We’ll be taking a ferry next fall to Stehekin Lodge and exploring Lake Chelan National Recreation Area, which connects to the southern end of North Cascades. In past visits, we’ve hiked the Cascade Pass Trail and enjoyed the alpine views and mountain goat herds.

I describe Olympic as three parks in one because it features coastline, rain forest and mountain ecosystems. We always look forward to hiking Hurricane Ridge and exploring the tide pools at Beach #4.

One trip or five?

We’ve visited the Pacific Northwest five times and have never tried to take in all three national parks in one vacation – it’s just too much unless you have at least two weeks or feel content with just sampling each destination. Plus, Seattle offers a lot of urban distractions as well as Victoria and Vancouver across the straits in British Columbia.

After hiking vacations, we typically spend a day in the nearest big city readjusting to urban life. Seattle’s crowded downtown is fun. We strolled its famous Pike Place Market and sampled sidewalk vendor seafood chowder, local breweries like the Old Stove and a few loops on the Seattle Great “ferris” Wheel at Pier 57. Walking along the waterfront, we spontaneously bought tickets to Wings over Washington, described as “a flying theater” and “aerial adventure.” The attraction surprised us with campy fun and a “Disneyesque” motion ride over the state of Washington and its mountaintops, rivers, oceans and cityscapes. Worth the money, in my opinion.

Locals always seem surprised when they learn that we’ve visited Rainier and the Pacific Northwest multiple times. We’ll keep returning and smelling the wildflowers. And maybe I’ll have my citation book by then.