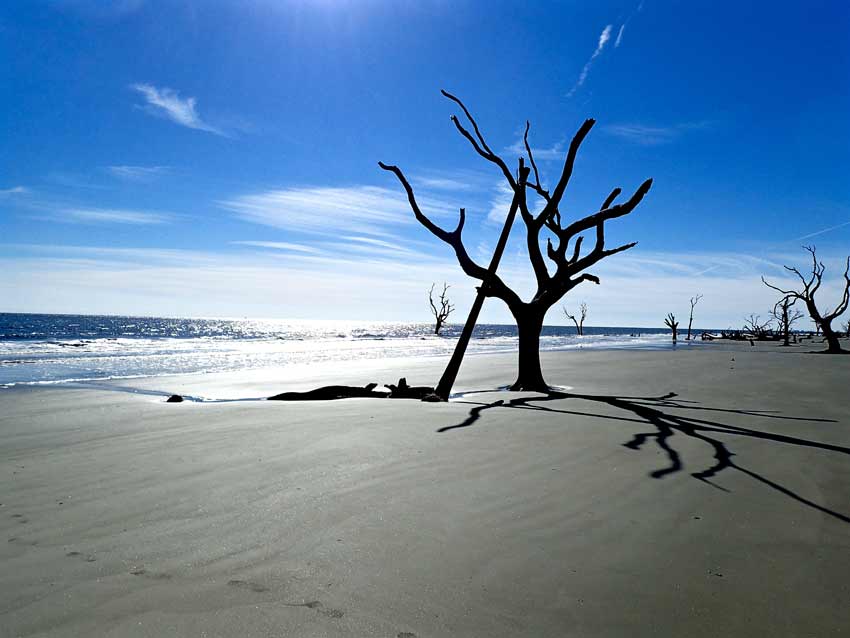 From the Atlantic, Caribbean and Pacific

We’re trail fanatics, not beach bums. But we enjoy the surf and mix in vacations that include the ocean and sandy beaches. We stroll along where the waves just reach our toes and search for interesting shells and sea creatures left behind.

We’ve spent past vacations enjoying beach chairs, umbrellas, boogie boards and pina coladas along the North and South Carolina coast and in the Caribbean. We still love the beach but now we’re more likely to include them as part of a coastal hike with cameras and backpacks.

This article shares our five favorite beaches and a few of the interesting creatures we’ve discovered while enjoying the ocean shores.

Known for its coral reefs, stingrays and sea turtles, vacationers love the laid-back beach life on Grand Cayman Island. We’ve visited five times and were drawn back by the amazing Caribbean blue water and the snorkeling.

We especially enjoy Seven-mile Beach and its long stretch of surf and sand. The beach is now only 5.5 miles long, but I don’t think a name change will occur because “Five-and-a-half-mile Beach” lacks the pizzazz of the original name.

We stopped at beach bars for exotic drinks and walked the beach to reach restaurants for lunch and dinner. Nothing tastes better than a Caribbean cocktail served in a hollowed-out coconut decorated with an orange-slice mouth, pineapple wedge ears, cherry nose, olive eyes and festive mini umbrella floating inside.

It’s three parks in one – mountains, rain forest and ocean. Olympic National Park, just west of Seattle, is one of our favorites and we’re drawn back often because of its diverse ecosystems and wilderness beaches.

Picking just one is difficult, so I wimped out and selected two: Ruby and Rialto beaches. Both are easily accessible at low tide. More beaches are located along the park’s 73 miles of coast if you’re motivated to walk and explore.

We love the beach’s tide pools, accurately described by the park’s website as “nurturing a living rainbow of colors and texture.” If you can, plan your vacation to be here when low tides occur during daylight hours. Nature will reward you with sea stars, urchins, anemones and other fascinating creatures.

We visit frequently, in the spring and fall when temps and humidity are on the cooler side. Boneyard Beach stretches along the coast of Cape Romain National Wildlife Refuge, which is magical, especially at sunrise. The only way to reach this location is by ferry with Coastal Expeditions, whose naturalists make the trip fun and educational with frequent dolphin sightings and a diverse collection of birds.

The beach and old maritime forest produce landscapes that cause photographers to drool. We enjoy walking the beach, exploring it for coastal sea creatures, watching the antics of shorebirds and searching for shells.

After the ferry service drops you off on the island, it’s a five-mile, round-trip walk to the Boneyard and back. Along the way, you pass safely through an ecosystem in which we’ve seen alligators, deer, bobcats, peregrine falcons, osprey and bald eagles. If the distance pushes your limit, Coastal Expeditions also offers a once-a-month beach drop that eliminates the long walk.

On the famous Road to Hana sits the remote Wai’anapanapa State Park and its black volcanic sand beach. The beach shelters in a small, secluded cove, which can fill up with tourists by the afternoon, so consider getting there in the morning.

You can explore other sites along the 52-mile Road to Hana, such as waterfalls, Seven Sacred Pools, other rustic beaches and ocean views, tide pools, eateries, food such as the world famous banana bread vendor and, of course, the small town of Hana.

It’s private and small. But we love it. It’s the waterfront for Harbour Village Beach Club on the island of Bonaire. We’ve stayed at this resort for two weeklong vacations. And we’re going back next year.

Bonaire isn’t known for sandy beaches – its rocky, rugged coastline is more famous for coral reefs, sea life, snorkeling and, most of all, diving. But Harbour Village features one of the few sandy beaches on the island. Plus, staff from the resort’s floating restaurant serve food and cocktails right to your hammock.

The Harbour Village Beach features underwater stone piles and new coral gardens being grown by the resort’s dive shop. We typically snorkel at least twice a day about 20-40 feet from shore. In addition to the schools of tropical fish, we’ve seen eels, octopus, squid and giant angelfish.