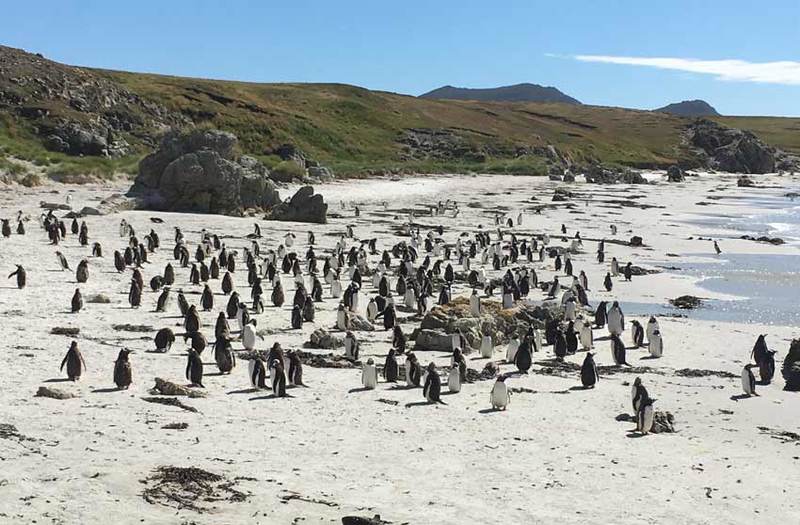 31 Jul Wilderness without parks – A week in the Falkland Islands

Posted at 08:55h in South America by guest 0 Comments

This guest article is authored by hiker, hike leader and outdoor writer Danny Bernstein. Danny has written several outdoor books. Her latest is DuPont Forest: A History, coming out September 2020. Check out her website for more.

Can you have wildness without trees, land mammals or public parks? In the Falkland Islands, it’s all wild. Most visitors who come independently, i.e. not on a cruise to Antarctica, come for the wildlife. Here, penguins rule!

For almost 40 years, I’ve had a dream to go to a destination so remote that most people, even well-read, well-informed folks, couldn’t find on the map. In 1982 – that’s when I, and most of the world, learned about the Falkland Islands.

In 1982, Argentina invaded the Falkland Islands, holding the residents prisoner. There was no local defense force at the time. Three weeks later the British military arrived and the real fighting started. After 74 days, the Argentinians surrendered and were shipped back to their country.

The Falkland Islands lie in the South Atlantic, southeast of Argentina, one of 14 British Overseas Territories which are self-governing but depend on Great Britain for their defense and foreign relations. The islands were uninhabited without indigenous people when John Strong landed on West Falklands in 1690.  Spain administered the islands for a while but relinquished them in 1811 when they were busy fighting the Peninsula War in Europe. In 1833, Britain reasserted its claim to the islands. In 2013, the Falklands voted – loud and clear – to stay part of Great Britain. There are 3,200 people, most who live in Stanley, the capital. Their economy depends on tourism, agricultural products including fine wool, mutton and beef, and selling fishing licenses.

I went out of curiosity and to meet the people. What was life like there? I flew into Stanley and stayed for a week with Arlette Betts who runs a bed and breakfast in the middle of town. For two nights, I organized a visit to another island.

The first thing that strikes me as I get my bearings in Stanley is the light. The pure unfiltered light with expressive clouds over a clean, blue sky. This is the beginning of February, the heart of the Southern Hemisphere summer but the wind is strong and cold; I’m not that far from the South Pole. There are no trees here but a lot of white grass and stone runs, rivers of stones created by glaciers. Upland geese strut on the waterfront.

The first day, I take a history tour with Tony Smith, a terrific tour guide with a passion for the Falkland Conflict. We tour the major locations. War debris has long been removed and there are memorials at various points. When I arranged the tour, I told Tony that I wanted to see the historic sites – what he thought was important. I think we visited all the Falkland conflict war spots.

Midafternoon, we stop for a smoko (tea and cakes) at Darwin Lodge, one of a few places in east Falklands to stay outside of Stanley. Darwin Bay was named after Charles Darwin, the famous naturalist who spent a night here in 1833. I scramble down to the water while Tony visits with the owners.

Then to Bodie Creek Bridge, a wooden suspension bridge built in 1925 and long abandoned, except as a visitor attraction. The bridge was built to shorten the distance between where the sheep were raised and where they were going to be sheared. There are few roads on the island, and most are unpaved. People drive cross country through fields, as the sheep scatter out of the way. Our last stop for the day is the Argentine cemetery, where most of the markers say:

Monday is my day to explore Stanley. If I only wanted to see the monuments, that might have taken a couple hours maximum. But I want to meet residents.

I walk to the post office where I buy lots of postcards. I have a deadline because if I don’t get my cards in the outgoing box by 11 a.m. today, they will sit here until Thursday. Mail only goes out of the country twice a week and heads for Great Britain. There it is sorted and dispersed out to the rest of the world. It takes a long time for a postcard to get to the United States.

Stanley is so small that every household has a post box at the post office; there’s no home delivery of mail. As I write my postcards at a table in the post office, I notice how the PO boxes provide an excuse for residents to catch up with each other.

Today is a cruise day; most visitors come on a cruise and stay from two hours to a full day on their way down to Antarctica. Cruisers don’t venture far but they photograph the whalebone arch, a symbol of Stanley, buy a cup of coffee and a trinket. Many small businesses only open on cruise day.

I walk the main street to Thatcher Drive. Margaret Thatcher, the longest serving British Prime Minister of the 20th Century (1979 to 1990)  is a hero here, with her own small street and a statue. The inscription says:

“They are few in numbers but they have the right to live in peace, to choose their own way of life and to determine their own allegiance.” Margaret Thatcher, April 3rd 1982.

The Falkland Conflict with Argentina was not the first time that the islands were invaded. A  battle occurred here December 8, 1914 during the first World War. Several American vessels have met their demise in these rough seas. Before the Panama Canal opened in 1914, ships went around Cape Horn, the southernmost tip of Chile, and stopped in the Falklands to be repaired.

Even today with a modern economy, life isn’t easy here. Their food stuff mostly comes from Great Britain. The islands only provide wool, fish and meat for themselves. Long-life milk is used for everything. Fruit and vegetables arrive from Chile once a week, just like independent visitors. If the cargo section is full of suitcases, the bananas don’t make it.

Coleen, the librarian at the town’s public library, says “Sometimes I look at the visitors coming off the plane and wonder how many apples and heads of lettuce this would mean.” Librarians are happy to talk and educate me. “Most visitors don’t make it this far out to the library,” Coleen says.

Today, Stanley attracts immigrants from over 60 countries, most from South America. They run the coffee shops and small restaurants off the main street that stay open for residents. Newcomers from Commonwealth countries are looking for a fresh start in life. But some residents have migrated from places I had only read about in history books like St. Helena in the South Atlantic – you know, where Napoleon Bonaparte was exiled and died.

A small but visible community of Zimbabweans have come here to supervise mine removal. The Argentinians laid mines meant for British soldiers during the Falkland War. The 1982 conflict left a lot of mines, which must be removed by EU rules, even though now only penguins tread this land. The Falklanders thought that demining was a waste of time and effort; penguins are too light to set off mines. There’s so much empty land that a fence and a sign would have been sufficient. But Great Britain signed on to a treaty that forces them to get rid of mines. Demining is a specialty that have taken Zimbabwean firms all over the world. Several families have settled here.

I went to Pebble Island, one of the outer islands, for two nights; “Camp”, they call it. The island has a lodge, an air strip and the rest of the island is a sheep ranch. The private island has been in the same family for over 150 years. My last day in the Falklands, I learned that the island is for sale.

I flew to Pebble Island on a six-passenger plane with FIGAS, Falkland Islands Government Air Service. Don’t bother looking for a flight schedule because there isn’t any. FIGAS comes up with a schedule the day before, based on passenger input. You give them your dates, destination, and weight when you book the flight, but they weight you when you check in anyway. The day before, they email passengers telling them when to report to the tiny airport. Before there was email, the announcement was made over the radio.

Dan Fowler is the pilot on the way out to Pebble Island. I am so lucky that I get to sit up front next to the pilot. We talk about his flight training in the United States while we hopscotch from island to island. Dan brings the mail, foodstuff and supplies to the outer islands. He picks up other items to deliver here and there; he’s a one-man UPS. On my flight back to Stanley, a farmer hands over a dog to the pilot, drugged, I presume, to be taken to the vet.

On Pebble Island, I join a day tour with a group of American naturalists who are island hopping for three weeks. We stop at several sites which still had downed Argentinian plane pieces. On the main island, local residents asked the government to remove all remnants of the conflict. But Pebble Island is private, and no one has  bothered; it probably adds to the value of the tour. We spend most of the day on the coast, studying different types of penguins, scrambling over rocks and gazing at the scenery.

The Falkland Islands are so sparsely populated that they don’t need national parks to keep their island pristine and protected. No recycling either – what would they do with the recycled stuff?

The people were open, friendly, and so happy to share their way of life with me. An amazing experience in fascinating Falklands!

Getting there: The details

If you’re coming to the Falklands from the Americas, there’s a flight once a week from Santiago, Chile. The only travel challenge is that you have to be prepared to pay almost everything in cash. I paid cash for my lodging, meals, and the tours. I stayed in a conventional bed and breakfast, not an Airbnb. I booked my FIGAS flight to Pebble Island online from home with a credit card but everything else was cash. I brought a lot of British pounds with me. Though there is a bank in Stanley there’s no ATM.