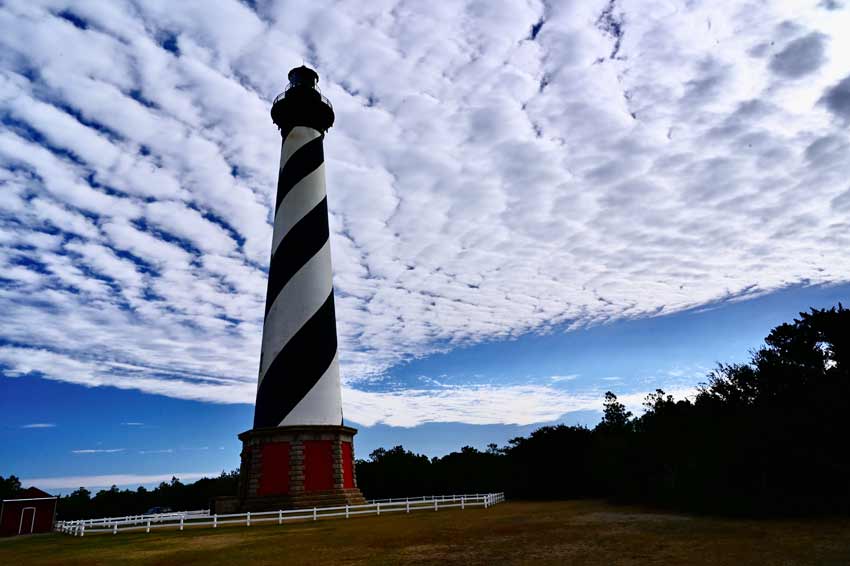 I love the mild seasons of southern states, but my northern Wisconsin roots persuade me to explore winters in the Carolina outdoors where we now live.

That sense of adventure recently took my wife and me to the beaches and wildlife refuges near Cape Hatteras National Seashore in North Carolina, also known as the Outer Banks. I skipped boogie-boarding in the surf but instead soaked up the solitude of a much less crowded coast during January.

I planned our five-day trip to make it completely contactless: meals from a packed cooler, accommodations and staff who take precautions seriously and outdoor activities that provided miles of fresh air and distance.

The Outer Banks lighthouses are some of the most interesting and recognizable maritime structures in the world. We enjoyed walking around the grounds and looking for the best vantage points for pictures. I like photography in winter. Outdoor colors, especially the sky, are deeper and more dramatic because of the lower position of the sun during this time of year.

We stopped first at Bodie Island Lighthouse, the less famous structure along the national seashore. It was built in 1872 and still has its original first-order Fresnel lens, which is trivia that lighthouse buffs will appreciate more than we did. While at Bodie Island, we also walked the short trail to a marsh viewing platform.

Cape Hatteras Lighthouse serves as North Carolina’s unofficial logo, with its barber pole style black and white bands. Built in 1870, it’s the world’s second tallest brick lighthouse at almost 200 feet. Neither lighthouse was open for climbing during our visit. And as you can expect, most visitor activities were curtailed because of either the pandemic or the season, but we anticipated those limitations.

Peaceful. Serene. Spiritual. Those are a few of the feelings we experienced walking the many beaches along the Cape Hatteras National Seashore. We strolled five different sections of beaches during our visit and only saw four people, all focused on surf fishing. We searched for shells and watched for shorebirds.

You can drive on designated sections of the national seashore if you purchase a permit. We typically chose beaches that were not vehicle accessible and, as a result, we saw only a small handful of jeeps and SUVs, but not enough to ruin our peaceful walks.

We prioritize finding birds and other wildlife during vacations. And the North Carolina coastal area draws an exciting array of seasonal winter wildlife. Thousands of Tundra Swans and Snow Geese migrate from their breeding habitat in the North American Arctic and tundra regions to reach winter-feeding grounds in the Hatteras area.

We hiked the ponds at Pea Island National Wildlife Refuge which is part of the national seashore. Then we moved inland a few days to explore the Pocosin Lakes and Mattamuskeet national wildlife refuges, which are famous for their large flocks of Tundra Swans and Snow Geese. Both the sight and sound of these huge gatherings are something every outdoor enthusiast should experience.

We also encountered large flocks of beautiful migrating ducks including Redheads, American Wigeons, Northern Shovelers, Buffleheads, Canvasbacks and Northern Pintails. Many of these waterfowl are some of the most colorful in the wild.

The aquarium renovated four years ago and added very creative exhibits, like this interactive sea floor.

The aquarium features three short movies, all very well done, including the reenactment of a famous civil war maritime battle.

Rain forced us to search for an alternative activity one day, which led us to the North Carolina Aquarium on Roanoke Island, the best small aquarium we’ve ever toured. If you’ve already visited but not in the past four years, go back! The aquarium completed a large renovation with creative design and fun, interactive exhibits.

It features many of the standard exhibits you might find in a small community aquarium, but we marveled at the unique displays that raised this “rainy day” alternative into a must-see attraction. We enjoyed three high quality short movies with real actors, our favorite being a reenactment of a civil war maritime battle. Kudos! And we played like kids on the interactive floor near the shark tank, where animated fish swam under your feet and identified themselves when you stepped on the floor screen. Double kudos! The coolest of all the exhibits? The jellyfish room with cylinder tanks and psychedelic lighting. And of course, walking through the sea turtle rehabilitation hospital and learning about conservation challenges provided a great learning takeaway for us.

We bought our tickets online and reserved an entry time. The Aquarium staff have implemented a thorough and safe plan for visitors during the pandemic. We’ve been very careful during COVID and chose this attraction because of its precautions.

Wandering Rose has published other articles describing strategies for safe travel by car. On this trip, we carefully chose our accommodations, packed a cooler with several days of food and drink and also ordered restaurant takeout several times. Hardly a glamorous vacation but the sacrifice allowed us to travel safely and play in the Great Outdoors along the North Carolina coast.