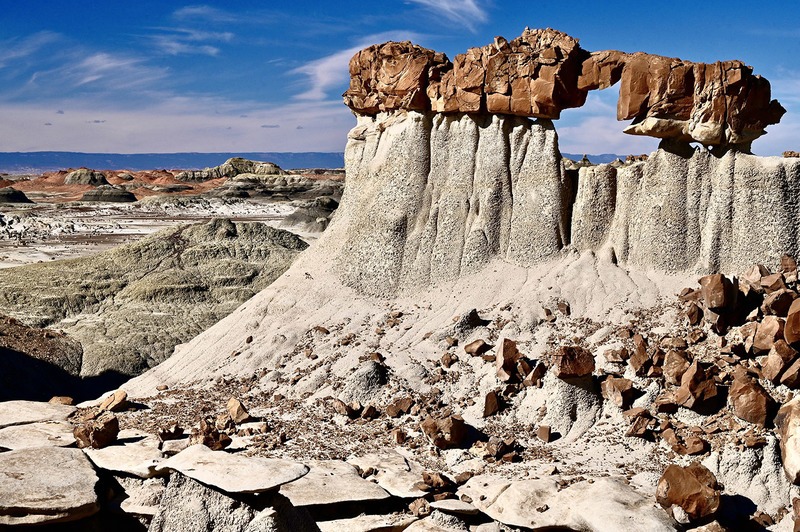 In northern New Mexico, about 40 miles south of Farmington and Bloomfield, lies one of the strangest and most captivating destinations I’ve ever visited.

I had never heard of Bisti/De-Na-Zin Wilderness Area until a year ago. Since then, I’ve schemed how and when to explore the area and finally visited in early November with WRT co-owner, Martin Rose.

The barren badlands feature geologic formations reminiscent of science fiction movies and alien landscapes, including pinnacles, hoodoos, spires and my favorite section called the “Egg Hatchery.” From the photos accompanying this article, you get a glimpse of the bizarre shapes carved by time and erosion.

Bisti/De-Na-Zin is also a destination people should carefully plan for since many of its famous sections are difficult to find, with no marked trails. The land is overseen by the federal Bureau of Land Management and preserved as a wilderness area rather than a national park or monument.

If you’re proficient with GPS and trail apps and you enjoy exploring, give it a try on your own. Take lots of water and tell friends where you’re going. We, on the other hand, hired a local guide and that decision proved golden for us.

I initially contacted the Farmington Convention & Visitors Bureau to learn more about the wilderness area. They were extremely helpful and emailed me maps and directions. In addition, they shared several guide services. And we settled on the Salmon Ruins Museum, which provided a full day tour of Bisti/De-Na-Zin.

Our guide was Tori, an archeologist, ceramics specialist and museum curator. To say we were pleased is a major understatement. We met at the museum and she drove us to the Bisti side of the wilderness area, which is the western section. The east side is the De-Na-Zin region. The early November temps started in the 40’s and rose to about 65 degrees, perfect for our meandering hike of eight miles. Personally, I would not want to explore this area in the hot summer months.

Tori led us through Bisti, taking us to locations within the wilderness area that we would have never found on our own. We stopped along the way to admire fossils, petrified trees and the continuous rock gardens showcasing the weird and fantastical. We soaked up Tori’s knowledge of archeology, local culture and the ancient peoples who lived in the region. She also conducts tours of the Chaco Culture National Historic Park and several other nearby locations.

Brewery awaited us after Bisti hike

As a side note, we stayed overnight in Farmington and really enjoyed the food and beverages at Three Rivers Brewery and Distillery. After eating (and drinking) we walked around and admired all of the memorabilia, old posters and antiques decorating Three Rivers. For me, it contained the best collection of throwback “stuff” I’ve ever seen in a brewery or restaurant.