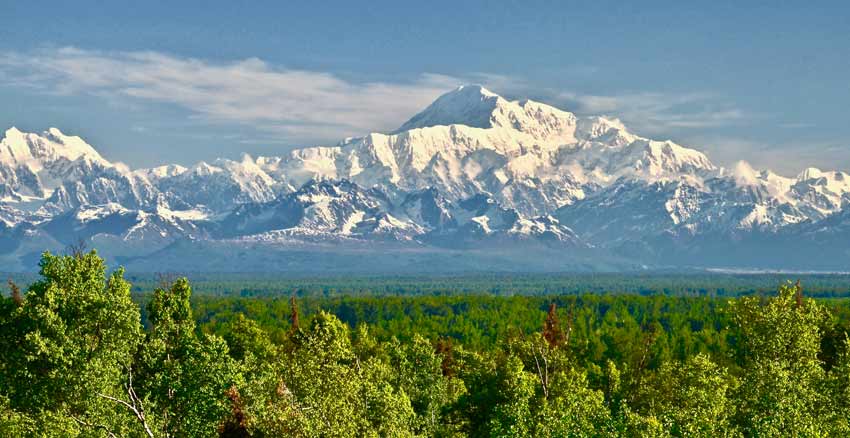 Posted at 14:57h in United States by Jim Tobalski 0 Comments

We’d thought about Alaska over the years. And then decided to stop wondering. So we booked a weeklong cruise into Glacier Bay National Park and, with some hesitation, added an extra week by land with the same tourism business.

Why the hesitation? We’ve always planned our own vacations to national parks and wilderness destinations. And while we generally like people, we’re not fans of groups on vacations – we covet our solitude.

But Alaska is big and wild. And its national parks are less accessible than those in the lower 48 states. So we felt more comfortable “sampling” the land of the midnight sun and letting someone else do the planning and guiding.

This article covers the land package. We’ve written a separate post about the cruise portion.

I can’t begin to counsel you on all the options available to cruise and explore Alaska by land. I can, however, tell you about our choice.

We wanted an eco-cruise type experience and a smaller ship that could explore areas inaccessible to the larger cruise lines. As far as the land portion, we prioritized more hiking, outdoor recreation and less traditional sightseeing.

We chose UnCruise Adventures based upon our goals and enthusiastic recommendations by friends and fellow travellers. To start our trip, we traveled by rail from Anchorage, stopping along the way to enjoy the Talkeetna Wilderness and both Denali State Park and Denali National Park & Preserve for five days. And we returned to Anchorage via luxury bus.

Our land vacation included outdoor activities arranged by UnCruise. After spending a half-day on the train, hiking guides picked us up and we trekked a few miles on the Talkeetna Lakes Trail, learning about flora and fauna. My highlight included a goldeneye duck lifting off from one of the lakes, circling and then gliding right past us in the forest into a tree cavity, where it was nesting.

During all of the activities, our tour group of 30 split into smaller groups to make the experiences more intimate. I liked that, especially when we kayaked on Byers Lake with clear views of Denali on the horizon. As I’ve mentioned before, we’re not boat people, or kayakers, but this outing was special. We also hiked in Denali State Park to fantastic views of the Alaska Mountain Range, taking a break with a provided snack lunch that included caribou sausage. Nice touch!

Heaven opens up in Denali

We joined the 10% club during our visit to Denali. That’s the percentage of tourists who get to see Denali and its 20,310 feet unobstructed by clouds. Approximately 30% see part of the mountain, which makes its own weather and apparently prefers overcast to clear. Luck was on our side and we enjoyed great views for two days.

The mountain wasn’t in view on the day we entered the national park via bus as part of an excursion that mainly promised wildlife viewing.

Denali National Park is truly a wilderness and government agencies manage it that way. Very few trails exist for hikers. That’s why most people enter the park by sightseeing bus, on the only road into Denali. Buses can be transit only or narrated by a naturalist, the latter being our tour. I liked having an expert talk during the drive – we learned a lot during her narration.

We saw a variety of wildlife: caribou (same as reindeer), bald and golden eagles, Dall sheep, moose and grizzly. But the sightings were sparse. That can happen on trips like this – it’s no one’s fault. Wild is wild!

A passenger thwarted our best sighting. We were leaving an overlook stop along the road and a huge grizzly walked right in front of our bus, about 25 yards away. We were all getting our cameras ready when a lady yells hysterically, “I left my cellphone outside at the turnout!” Like, who cares – there’s a grizzly photo opt of a lifetime in front of us. But the bus driver backed up so she could find her phone. She got off the bus and it began to hail on her, which I thought was funny at the time. Then someone on the bus yelled, “Her phone is right here on her bus seat!” She got back on the bus and took the “Walk of Shame” all the way to the back. We then drove forward but the grizzly had vanished down the hillside, along with my dream of a National Geographic cover photo!

We made a couple of ‘touristy” stops along the way that also purposed as mealtimes and restroom breaks. The Alaska Native Heritage Center proved to be much more than a curiosity. It moved and humbled us.

We toured native dwellings that introduced us to life dating back 10,000 years. We watched demonstrations of native games and dance. And students served as tour guides and shared their culture with enthusiasm and pride.

Will we return to our 49th state?

Yes. Now that we’ve sampled Alaska, and learned a few things, we’re planning to go back, only next time we’ll start with an UnCruise sea excursion and then carefully plan our own land vacation.

We loved the land part of this past adventure. It’s a guilty pleasure to have someone else do all the planning, transfers, arrangement of side-trips and restaurant choices. We never had to check-in to a hotel registration desk or touch our luggage — it was always waiting for us in our room. Hmmm? On second thought, maybe we won’t plan our own land vacation.

Our only major disappointment? No one greeted us when we returned to our North Carolina home, unpacked our luggage and served us cocktails. That’s going on the satisfaction survey!

Interested in Alaska by sea? Click here to visit places few have seen on a small ship adventure cruise.